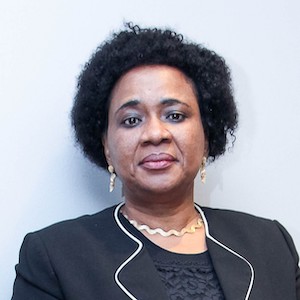 Dr. Elizabeth Olanike Oduwole is a Permanent Secretary in the Lagos State Public Service in Nigeria. She is a Consultant Anaesthetist and has been widely exposed both locally and internationally to several courses in Trauma and Emergency Medicine.

Dr. Oduwole was head of the Lagos State Emergency Medical Service Lagos (Ikeja) for two years before moving over to another hospital as the Medical Director/Chief Executive Officer. She is well inclined to both Administrative and Clinical Medicine. As a Volunteer Commonwealth Medical Expert to the Pakistani Earthquake Disaster in 2005, she served selflessly there. Dr. Oduwole team player who is always committed to any assignment given to her.

Dr. Oduwole is the recipient of several grants and awards these including the International Federation of Colleges of Surgeons (IFCS) / WHO grant to attend the IFCS Summit in the United States in 2002, the Best Managed Public Hospital in Lagos State Award in 2013, and “The Commonwealth” Award for Outstanding Contribution to Health and Well-Being in March 2017. She is happily married with children.