Open and close the panels to view the previous webinar recordings. Looking for webinars from 2016-18? Please click the button below to access them. Please note the recent webinar recordings and presentations slide decks are available exclusively to WADEM members.

Are you a WADEM member and your membership is expired? 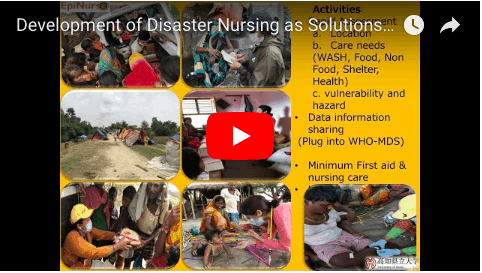 Development of Disaster Nursing as Solutions to Global Issues from Japan

In the aftermath of the Hanshin Awaji Earthquake in Japan, the Japan Society of Disaster Nursing (JSDN) was formed (1998) to provide a platform for nurses to share their activities related to Disaster Nursing. A decade later in 2008, the World Society of Disaster Nursing (WSDN) was established to facilitate the exchange of knowledge and skills internationally. The Great East Japan Earthquake of 2011 and other frequent disasters have triggered the need for more trans-disciplinary work, high-level care throughout all phases of a disaster event, and the need for nursing leaders.

While there have been some challenges implementing Disaster Nursing into practice, education, and research, the Disaster Nursing Global Leadership Programme, Gensai Care, and EpiNurse Project represent some of the good practices from Disaster Nursing which have contributed to the Sendai Framework for Disaster Risk Reduction, the UN Sustainable Development Goals, and sustainable human security. 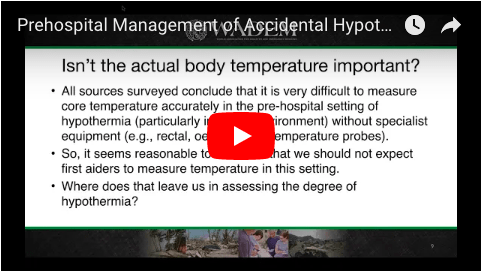 Australian Resuscitation Council (“ARC”) Guideline 9.3.3 “Hypothermia: First Aid Management” was published in February 2009, and Guideline 9.3.6 “Cold Injury” was published in March 2000 (the scope of this Guideline covers “frostbite,” “frostnip,” and more minor cold injuries such as “chilblains” (pernio). The First Aid Sub-Committee of the ARC initiated a review of these Guidelines, which has included an extensive literature review and, as there is a paucity of relevant evidence from clinical trials, reference to expert opinion and other published guidelines. The ARC has considered progressive iterations of the updated Guidelines at its meetings in November 2018 and March 2019, and it is hoped that both Guidelines will be finalized and published as “co-badged” Australian and New Zealand Guidelines by mid-2019.

The audience for these Guidelines is any prehospital first responder, whether a layperson or a health professional, so the Guidelines must be pitched at a non-expert level. There is also an important distinction between “accidental hypothermia” and “induced hypothermia” as used in special circumstances in medical practice. An additional perspective was brought to the table by the Surf Life Saving, New Zealand Resuscitation Council, and Australian Ski Patrol representatives on the ARC, and as a result, it was decided to include some material on preparation for entry into cold environments and prevention of hypothermia and cold injuries. It was also thought important to include consideration of casualties who were alert and shivering and could easily be rewarmed without needing hospital treatment. 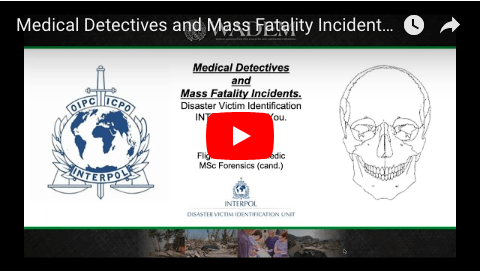 From first response to family closure, join us as we explore the forensic science of identifying the fallen. Disaster Victim Identification (DVI) encompasses many disciplines, including anthropology, odontology, radiology, molecular biology, and more.

We will briefly cover the evolution and science of victim identification, psychosocial support for families and first responders, Interpol procedures, and your potential roles and responsibilities with respect to forensic science and mass fatalities.

Mass Casualty Incident Triage and then Some - Dr. Eric Weinstein 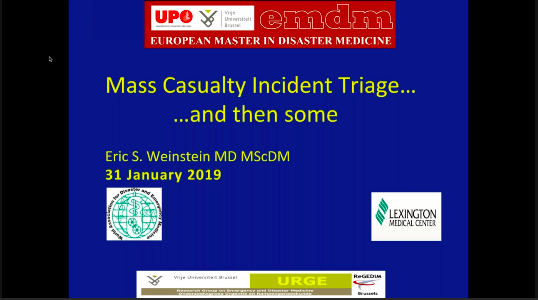 Mass Casualty Incident Triage and then Some...

The decisions to sort, assess, treat, and transport the many injured in one or several close locations after a sudden onset disaster is a challenge to balance resources in an ethical manner. The science is evolving to create an ideal system where there are basic fundamentals to concentrate when working with the actors involved to reach a common platform in context to base education, exercises, and set outcomes.

The webinar presentation consists of the following objectives: 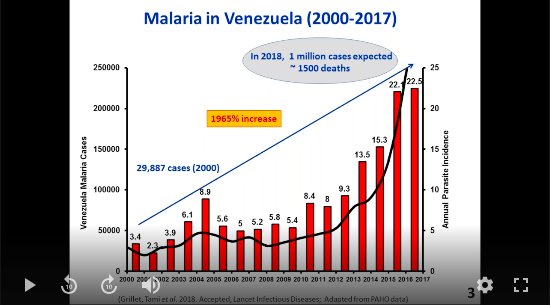 During the past four years, Venezuela has plunged into a humanitarian, economic, and health crisis of extraordinary proportions. Economic and political mismanagement have precipitated a general collapse of Venezuela’s health system with hyperinflation rates above 25,000%, increased poverty, and long-term shortages of essential medicines and medical supplies. This complex situation has resulted in the dismantling of structures at the institutional, legal, political, social, and economic levels affecting the life and well-being of the entire population.

In this context, the rapid resurgence of previously well-controlled diseases, such as vaccine-preventable (measles, diphtheria) and arthropod-borne (malaria, dengue) diseases has turned them into epidemics of unprecedented magnitudes. In response to Venezuela’s rapidly decaying situation, a massive population exodus is ongoing towards neighboring countries. Emigrating infected individuals are unwillingly causing a spill-over of diseases beyond Venezuela’s boundaries. With a government in denial of the current healthcare tragedy and neglect towards the re-emergence of diseases, a dangerous scenario is brewing for even further epidemics of vast consequences not only in Venezuela but in the region of the Americas.

Older Adults in the Eye of the Storm - Prof. Sue Anne Bell 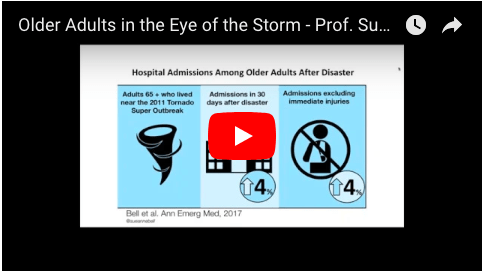 Older Adults in the Eye of the Storm: Research & Practice to Improve Health of Seniors after a Disaster

The repercussions of disasters for older adults can be severe, as the aging population is particularly vulnerable to the effects of a disaster. While the risks to older adults are clear, the diverse mechanisms by which older adults are harmed—or are resilient and recover—remain understudied. In this webinar, Dr. Bell discusses her research on long-term health effects of disasters on older adults, where a fundamental premise of her work is to use novel methods to understand how disasters affect health outside of the common focus on the immediate after effects, with the aim of building a better disaster response.