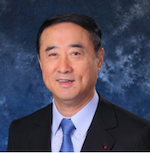 Dr. Zhongmin Liu has been devoted to disaster and emergency medicine, he was under the tutelage of one of the founders of Chinese Emergency Medicine, Dr. Yitang Wang, who was the first specialist in China to promote CPR. Dr. Liu is the first in China to implement an “integrated emergency medical model” and promoted nationwide, which has achieved good results.

In 2006, he founded the Trauma Research Institute of Tongji University and worked as one of the pioneers of modern emergency and disaster medicine in China. He led a medical relief team in Sichuan Earthquake in 2008. The lessons and experiences from the Sichuan Earthquake rescue raised the urgency of building a comprehensive disaster medicine
system in China. Through his efforts, the first Disaster Medicine Department in China was established in Tongji University in 2008. Chinese Society of Disaster Medicine was founded in 2011 under the efforts of Dr. Liu, which indicates the qualitative development of disaster medicine in China. The society organizes academic activities, provides training for the public and the professionals, makes specific guidelines to improve the practice, edits and publishes the disaster medicine textbooks for higher education, and advises the government in policy and decision-making.